Steps Toward a New Home – Framing the Walls

This series will suggest some of the basic steps to follow, and things to be aware of, as you begin down the path toward home ownership.

Now that we have a sturdy, level subfloor in place, it’s time to start framing the walls. Typically, the wall sections are constructed laid out on the subfloor, then raised, put in their proper locations, and nailed to the subfloor. Exterior walls are framed with 2×6 studs. Openings are left for doors and windows and framed with a “header”. A header is a beam that is placed perpendicular to the studs, above doors and windows, and are necessary to redirect the weight load of the upper floors or roof around the door or window, and down to the floor.  This protects the doors and windows from being crushed by the weight from above. 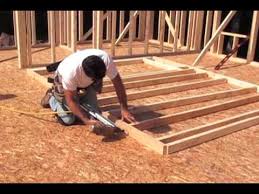 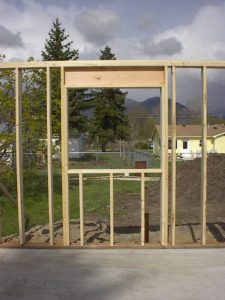 Once the exterior framed sections are erected, they’re leveled, squared, and braced in place. Sheeting is then attached to the sections to create the outside wall of the structure. Exterior walls are typically sheeted with plywood or OSB (oriented strand board, a composite wood product, used specifically for this purpose). Next, a house wrap is attached to the exterior wall. The house wrap is designed to prevent water and insects from entering, while allowing water vapor to exit, thus reducing the chances of mold and rot on the walls. The finished siding of the home, whether it will be vinyl, aluminum, or a wood product, will be installed directly over the house wrap. 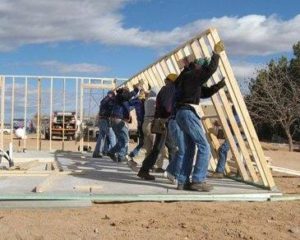 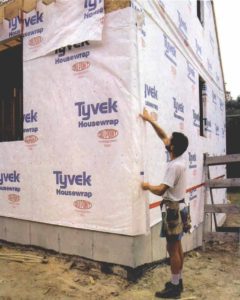 The Main Point – Framing takes a special set of skills. The person laying out the walls has to be adept at reading house plans, and knowledgeable in the mathematics of construction. In order to prevent problems for the finish carpenters later in the project, it’s imperative that the walls be constructed to the exact size, and attached to the subfloor in exactly the correct location. A larger builder will usually have crews that specialize in the framing aspects of the construction process.

Once the walls are secured in place, it’s time for the roof.

Watch for that next month.

We entered this project a little timid and unsure if building a home was right for us.  Zach Juadis helped us take some ideas and turned them into a house we love.  We relied on him and everyone at PortSide for their guidance and knowledge in the choices we made. A special “thank you” to every PortSide employee and sub-contractor we met on site.  Everyone we talked with was friendly, knowledgeable, and certainly hard working.  They took pride in what they were doing and helped us understand…

Couldn’t be happier with the beautiful home PortSide constructed.  From design to the finished product, PortSide was easy (even fun) to work with.  They used great creativity in helping us turn our vision into reality — while staying within budget.  PortSide guided us through everything from how to position the home in order to maximize sunsets, to the use of materials that would minimize maintenance.  Our wonderful project manager, Jim, kept everything on schedule and was extremely responsive…

We had our architect friend design our home, but PortSide’s Building Consultant kept the home in budget and on schedule. The coordination was amazing and all of the subs were great. We could see a great deal of mutual respect for each other. We were very proud to have PortSide showcase our home in the Showcase of Homes.

Loved working with PortSide.  Kurt is very knowledgable, and has great ideas and recommendations.  Kurt is wonderful to work with, as well as being very patient and understanding as the build is going on.

It has been a real pleasure working with all those involved in all of the three projects that PortSide has constructed for me over the past years. I have found that PortSide’s craftsmanship has been as good as any of the work that I have seen in my 55 years of construction.

We are very happy with the results of the remodel and the addition of a sunroom and master bedroom suite that PortSide Builders planned and completed for us. Not only were the PortSide employees and subcontractors professional throughout the design and construction process, they were also kind, understanding and helpful. The craftsmanship of the finished project is excellent. We would recommend PortSide to anyone with a building or remodeling project.

We already had desigin ideas – we just needed someone to put it all together. Our Building Consultant was very good at giving ideas and was great at listening to ours. Everything was well orchestrated and everyone PortSide recommended was awesome.

To us, PortSide means trust, integrity, and commitment.  As residents of Florida, we are unable to be onsite very often.  However, knowing that Joel Daoust is our project coordinator, has given us a high level of comfort during this process.  Our every request has been met with a smile. We would recommend PortSide to anyone looking for a custom builder.  Thank you to everyone at PortSide.

As homeowners who have built a house in the past, we can attest to the fact that PortSide is best in class in all areas as a builder. They were extremely responsive, went out of their way to provide solutions, and kept everything on schedule. They provide a full service, from top to bottom, with the highest levels of quality and satisfaction. We would absolutely give PortSide and the people who work there a 5-stair rating. They literally handled everything from start to finish to our immense ple…

We have been extremely impressed with the services provided by PortSide Builders. At the beginning of our project they provided us with a work schedule and they always kept to the schedule. When we had a question or concern it was immediately addressed. Most of the time issues were addressed even before we mentioned them. We are extremely happy with PortSide and would recommend this company to anyone contemplating home remodeling, roof replacement or any other type of building project.

You can find out more about which cookies we are using or switch them off in settings.

This website uses Google Analytics to collect anonymous information such as the number of visitors to the site, and the most popular pages.

Please enable Strictly Necessary Cookies first so that we can save your preferences!